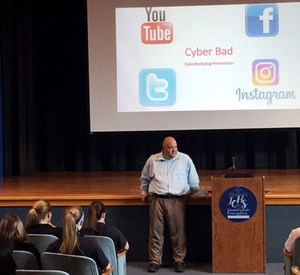 The student body at Immaculate Conception High School in Lodi, NJ, attended an assembly on CyberBullying.

Jamie Ciofalo, chairman of the ICHS Board of Trustees and a seasoned education professional, presented about the dangers of cyber bullying and bully prevention.

Renee Gitto, director of advancement, said, "By building awareness and instilling a sense of urgency about bullying, we are arming today's students with the tools to protect not only themselves, but their friends and classmates as well."

Jamie emphasized, "Your behaviors on social media impact not only the person it's directed to, but their family, their friends, and you. All your actions have a ripple effect"

According to the FBI, bullying remains one of the largest problems in schools, with the percentage of students reportedly bullied at least once per week steadily increasing since 1999.