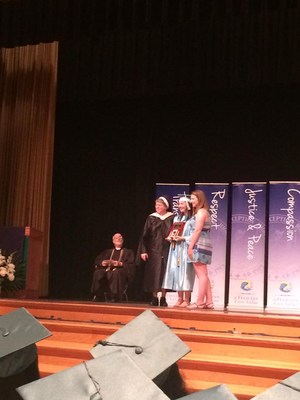 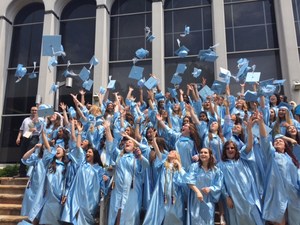 Fifty-eight young women from the Class of 2016 received their diplomas from President/Principal Joseph R. Azzolino. The commencement address was delivered by alumna and ICHS board member, Alexandra Weir Cullen ’08. Amanda Leger ’16 the school’s valedictorian spoke to her class about their new adventures and quoted Dr. Seuss, while Lauren Bolcar ’16 presented the salutatorian address.  In addition to the honored guests, Jacqueline Kajon ’16 welcomed parents and friends with the invocation while Brooke Mc Pherson ‘16 concluded the commencement with the benediction. Special music for the ceremony was performed by the ICHS vocal ensemble including selections “Let It Be” and “Until We Meet Again”.  ICHS alumnae played an important role in the ceremony including an address from Robin Dellraria Manzo ’73, President of the ICHS Alumnae Association as well as several members of Class of 1966 processing in with the graduates as part of the ICHS Legacy Walk tradition.

Megan Jones ’16 had the distinct honor of being awarded the first Felician Core Value Award. The newly created honor celebrates a senior who throughout the year exemplified the chosen core value of Respect for Human Dignity. Additionally, Megan was the recipient of the Blessed Mary Angela Award, presented by last year’s recipient Katrina Flood '15 and Sister Marie Alexander Siegel, C.S.S.F.

“What a journey and what a privilege it has been to see these young women grow from timid freshman to confident young women living the Felician Core Values. We are beyond proud and wish them all the best!” shared, Joseph R. Azzolino, President/Principal.

ICHS Class of 2016 graduates plan to continue their education at colleges and universities throughout the United States including University of Massachusetts – Dartmouth, Seton Hall University, Rutgers University, New Jersey Institute of Technology, Felician University, and many more.  The graduates have been awarded over $2,000,000 in scholarships.