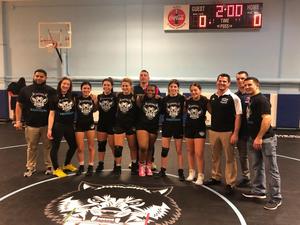 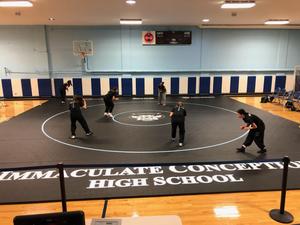 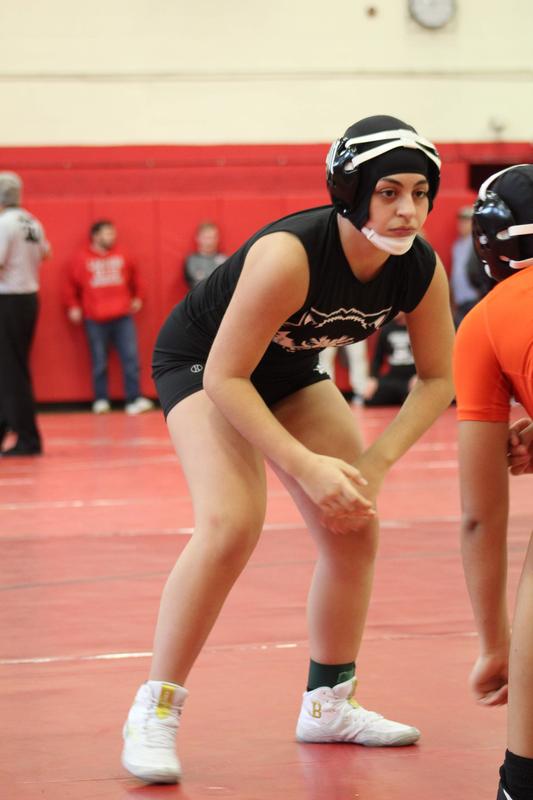 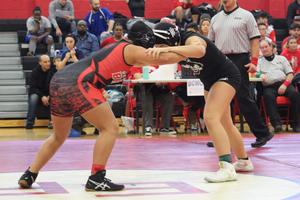 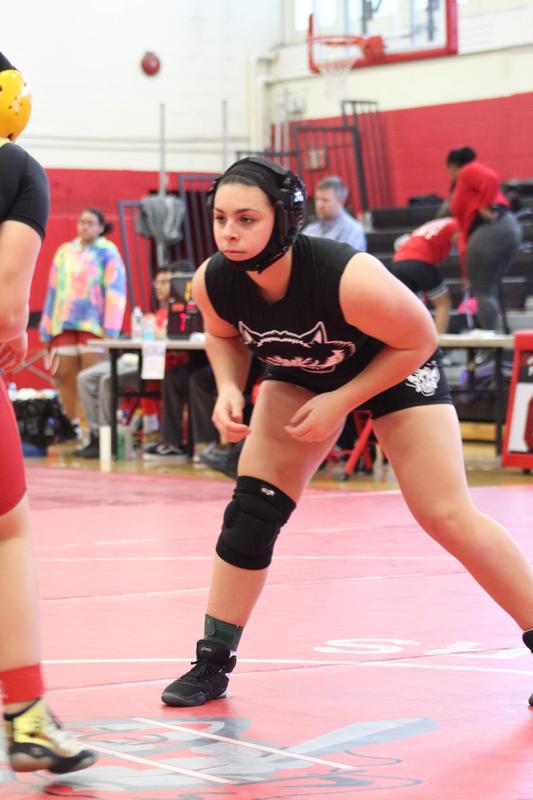 LODI — Twenty minutes of wrestling will last forever in the history of a growing sport.

Girls wrestling crossed another barrier on Monday, February 3, 2020, when Elmwood Park and Immaculate Conception faced off in the first standalone dual meet ever in Bergen County. The atmosphere was electric in Lodi, where a capacity crowd watched the Crusaders and Blue Wolves battle to an 18-18 tie.

In the end, this match was about so much more than the final score or the results of the five contested bouts. The chance to be introduced on the mat and compete for a team has been a long time coming.

“I’m so envious of the guys that get to go out there in the lineup,” Crusader senior Natalie Vega said. “It was an amazing feeling to get to be part of that finally.”

In total, there were six bouts in the official meet and another three that featured wrestlers from Lodi High School.

Immaculate Conception’s Shea Ramirez accepted a forfeit to start the night and the rest of the meet flew by with five consecutive pins. Elmwood Park rallied from 12 points down and tied the score on a last-match victory from Sidjourney Knight.

“Seeing girls go out there and wrestle with boys and still beat them was so empowering,” Knight said. “I wanted to do it myself.”

Girls wrestling is in its second season as a sanctioned sport in New Jersey and the reaction has been immediate.

The Crusaders have seven girls on the roster and may be able to fill out the 11 official weights before long. The Blue Wolves are new to the wrestling scene this season, but already have six athletes who signed up.

It’s only a matter of time before other teams follow the example set on Monday night.

“Wrestling guys is tough and prepares you, but wrestling girls is a totally different feeling,” Vega said. “With those girls, I see a lot more passion, a lot more emotion. It’s a brawl out there.”

New Jersey wrestling fans have gotten to see that firsthand at the state tournament at Boardwalk Hall and similar events that have sprung up across the region.

What they haven’t seen are traditional dual meets, which allow girls to feel the camaraderie of wrestling for a team, rather than for themselves. There have been just over a dozen examples in New Jersey this season with more than a couple of bouts. That’s what made it exciting a few days ago when Crusader coach Tom Mulligan and Blue Wolves coach Dale Fava finalized the plan to go head-to-head.

“I was nervous at first,” Immaculate Conception’s Victoria Devoto said. “As soon as the match started, I was like I need to pin. I can get points.”

The gym was buzzing when Devoto took the mat and it erupted even more when she upset Kaya Augustyniak. Devoto scored a takedown early in their match before pinning the Bergen County champion in 1:28.

The response from the Crusaders came 45 seconds later when Vega took out a county champion of her own.

“It’s a pleasure to know that not only did I get to succeed for myself, I did something for my team,” Vega said. “I love them like my sisters. To do something for them is amazing.”

Immaculate Conception’s Caitlin Filja followed with a pin and Elmwood Park answered with wins from Maria Taseva and Knight to close out the event. Both teams then came together for a picture to commemorate their spot in history, a night that will be remembered.

“It’s a great feeling,” Filja said. “Getting out there today and winning the match was one of the best feelings ever.”