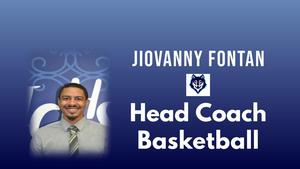 Entering his fifth season as a Head Coach, Jiovanny Fontan, has found a new home with our Varsity Basketball Team. Fontan won a high school national championship with Saint Anthony’s High School in 2008 (which is featured in the documentary The Street Stops Here) and earned a full athletic scholarship to Fordham University. He was named to the Atlantic 10 All Freshman Team, but after his freshman season, he decided to transfer to the University of Southern California where he was the Captain and starting Point Guard.

Coach Fontan earned his Bachelors Degree in Sociology from the University of Southern California before briefly playing professionally overseas. For the last four years, Coach Jio Fontan has been heavily involved in girls high school basketball.  He has led his teams to two Non Public B State Championship appearances in 2016 and 2017, including a State Sectional Championship in 2017.  All of his 2017 players attended Division 1 schools on full athletic scholarships including Raven Farley, who was named a McDonald’s All American.

Jiovanny Fontan stated, “I’m excited about this upcoming season. The vision going into my first season is to create a high energy, high intensity, exciting environment everyday at practice. There’s a lot to teach in a short period of time, but with the right attitude and effort, we can accomplish our goals this season. My staff and I can’t wait to get started and we are looking forward to building a new identity while developing our student athletes on and off the court. I hope to create a culture that our students and staff members at Immaculate Conception are proud of.”