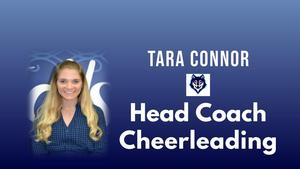 In September of 2016, Tara Connor began her career as a middle school English teacher. During her first two years as an educator, she learned the importance of each individual student while growing as an educator. However, she knew that she wanted to teach high school students. In September of 2018, she began her third year teaching and first year at Immaculate Conception High School.

Tara’s first year at ICHS as an educator gave her the opportunity to not only grow as an educator but continue her passion for education and English. She was able to teach English Literature and Journalism to sophomores, juniors, and seniors. Throughout her time at ICHS, she has served as a teacher and literary magazine advisor.

Apart from being an English teacher at Immaculate, Tara also coaches our Varsity Cheerleading Team. She has been cheering since she was in elementary school and continued on, cheering for Nutley High School and eventually, Muhlenberg College. In 2018, Tara took on the Assistant Coach position and loved working with the girls. Tara will be working alongside Brielle Malanga this coming winter as they co-head coach the 2019-2020 cheerleading season.

Tara Connor believes, “The temptation to quit will be the greatest just before you are about to succeed” ~Anonymous